Students awarded at the Palace 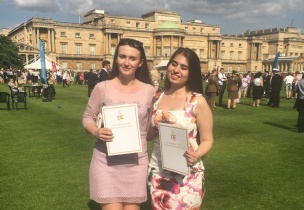 Congratulations to former Student President, Beccy Spriggs, and former Vice President, Kiana Kabiri, who recently received their Gold Duke of Edinburgh's Award at Buckingham Palace.  Their certificates were presented by Prince Edward and Bill Bailey.  Everyone had an amazing day, especially in the gardens of the palace!