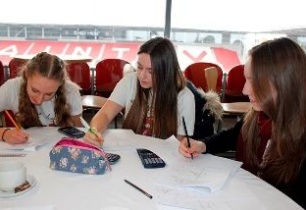 A group of Y11 students enjoyed a special day of English and Maths sessions at The Totally Wicked Stadium.

The students were put through their paces by Mr Griffin, Mrs Gordon and Mr Courtney in specially tailored sessions which were designed to help to support them in reaching Grades 7-9 in English and Maths. There was also a surprise tour of the stadium and a guest appearance by the Saints rugby legend Paul Wellens. Paul gave the students a speech on the importance of working hard and drew parallels to his own illustrious rugby career at both club and international level.