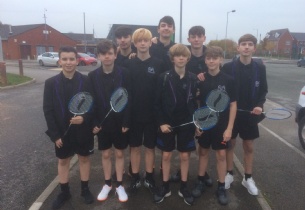 The team finished the group 2nd overall, narrowly missing a place in the Merseyside Finals. The B team also showed grit and determination in their matches where they were placed in a really tough group. They lost to experienced sides from DLS, Cowley and Hope Academy but came out with a thoroughly deserved victory against Rainhill A.

There was some excellent badminton played by each of the boys who played in both singles and doubles matches, a particular mention goes to Tom Ahearn who won all of his singles games.

Well done to all the boys who took part, you were a real credit to the Academy.