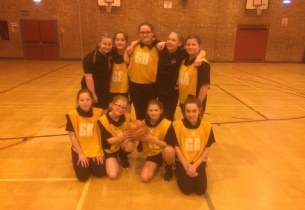 Year 7 Netball Team give it their best shot!

They beat Hope Academy 2-0, then narrowly lost in the last play of the game to De La Salle 1-0, they drew their last game with Rainhill 2-2.

Well done to all the girls who always represent the Academy impeccably well, and play with such a positive attitude.