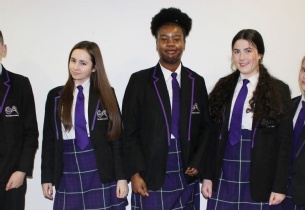 These 5 students have worked really hard in and out of lessons, and because of their efforts and responsibility as a prefect, they have been appointed the role of Senior Prefect.  They will now become part of the Student Leadership Team.

As part of their new role they will help run the Student Voice, and the Prefect system of Year 10.  They have also been appointed duties at break time around the academy, and they will be a point of call for staff and students.