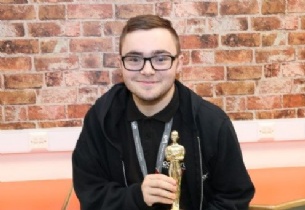 A special night for Tyler down at Totally Wicked Stadium.

We are proud to share with you some fantastic news about our Student Vice President Tyler Turner.

Tyler was nominated for this award after he was forced to deal with a terrifying attempted robbery at a taxi office.  Following this Tyler was given a Certificate of Commendation by Liverpool Crown Court's most senior judge.

Tyler said "It means so much to win this award.  It means a lot to be awarded a certificate of Commendation from the judge but to win this from the St Helens community is just overwhelming!”